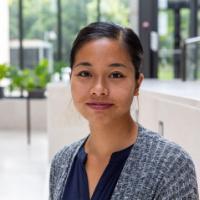 From Vancouver, Canada, Erika obtained her BSc in Honours Health Studies from the University of Waterloo in 2008. She continued to earn her MSc in Biology from the University of British Columbia Okanagan in 2011 under the supervision of Dr. Andis Klegeris on a project characterizing the impact of a glial secreted proinflammatory phospholipase on neuronal health. From 2012 to 2015, Erika worked as a research technician in the laboratory of Dr. Michael Hayden characterizing several preclinical mouse models of Huntington’s disease.

In 2016, Erika moved to Copenhagen, Denmark, to join Prof. Shohreh Issazadeh-Navikas’ group as a PhD candidate. Her current projects investigate the impact of defective type I interferon signaling on the development of spontaneous synucleinopathy and aging-related neurodegeneration in mice, with the aim of identifying potential novel therapeutic targets for Parkinson’s disease and other neurodegenerative disorders involving neuroinflammation and proteinopathies.